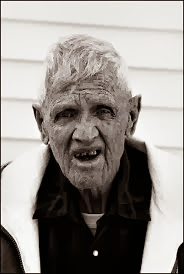 My grandfather was an agriculturist, really a hardworking man .He claimed , I do not know , as a deep scholar in black magic and anyway he was a famous wizard in our village and there was a flow of many devotees even from nearby villages and a few from remote towns . No one in our home really liked this wild practice of him but they kept silence as all of us were afraid of him even to utter a word without his permission.

I was his helper though my mom did not like as she had worried that I might get attracted to the lessons of black magic. So she tried to send me to a remote town where her sister lived. But that was in vain. When she talked and sought the permission of grandpa he looked at mom with his wide open eyes. We all knew the meaning of that look. It was a negative signal. I was happy as at least then I had escaped from her continuous and hesitating torture of ‘’go to play and stop chap this helping and more company.’’

He had a suitcase, huge and ancestral, made of teak wood where he kept his account and secret books, written on dried palm leaves, on black magic. It had many secret shelves that he only knew and he kept the keys with him even when he slept. Even the elders did not have permission to see those books but I was lucky as I had full freedom to see and it was my duty to remove dust from them opening the bondage of red ocher silks.

The respect and fear that I had with village men on grandpa brought me much benefit and privileges. I could manage well the mischievous kids and could become the leader of village kids. We were a headache for farmers especially for sugarcane cultivators.

I enjoyed an outing with him so much especially the one on every Sunday when the village market opened. We had always something to sell. That was an interesting journey as we did it on our own bullock cart

Vendors there in the market would give me some gifts and toffees for free and would pay a high price for our agricultural products. It was so funny to see in their eyes the fear and respect with my grandpa.

What an amazing experience here had happened once in every year where the celebration and special offering to grandpa’s secret God. Our home would be decorated with tender coconut leaves and colorful garlands. At midnight he would open a special room, that was closed the rest of the year and enter with a living cock, some bottles of fresh toddy and the door would be closed. It took some hours to open the door.

That was a horrible scene when it reopened;, kids would cry in fear while we saw the blood of chicken in his mouth as he would kill  the cock with his mouth and drink all the bottles of toddy. He would counsel us to pray well as his God entered inside him and he was then a God.

in  the prison of time , a  prince of dreams  ; handcuffed with fate Get 32 inbound links for free